The days have seriously flown by since Christmas.

Not only have I been freaking busy, but it's been a weird winter. There's no snow on the ground. It rained a few days ago. Ice is melting like crazy. It feels like in a few days I'm going to have to clean up the yard. I dunno - the weather is nice but climate change is not good. It doesn't feel like we're going to have many generations of people left on Earth - maybe 4? That's my guess with all the crap that's going on and the non-renewable resources that are being gutted from this planet.

But enough with that.

It's finally sunny outside for a few days. We've been able to walk to school, go to the park. Bimmer Man got the snip-snip which means we're DONE having kids. SO THAT MEANS I GET TO PURGE ALL THE CRAP. That's exciting. Like, super exciting. I'm currently waiting for Chewie to wake up so I can go grab a bag of maternity clothes and pass those on to another friend.

Unfortunately I'm still wearing a safety pin. The local JCC has had two bomb threats. Babies and toddlers were wheeled out into the parking lot in cribs. Swim classes were evacuated with older children carrying younger children out into the parking lots. JESUS FUCKING CHRIST. Yes, I'm going to swear - it's been that bad since Trump has been elected President. People suddenly think they can be racist as HELL and get away with being a terrible person. I've marched, I've stood on a walking bridge twice, I will not back down. I will stand up to terrible people.

I've taken up watercolor painting again - and teaching The Monkey to do some awesome painting too. It's been an absolute blast. I actually painted her a Valentine's Day card yesterday filled with sparkly hearts. She makes me so happy! 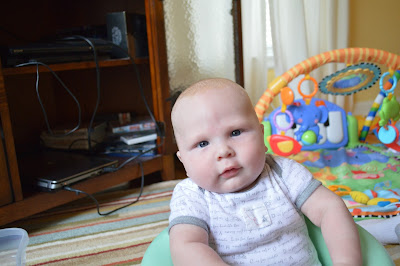 And the Fisher Price Kick & Play Piano era has come to an end. I sold that AWESOME piece of children's equipment last week. It was Monkey's favorite AND Chewie's favorite toy. Now there's more room for more kid stuff. Sort of.

Next to be sold is the changing table - I've been having to wrestle Chewie to the ground for diaper changes and basically changing him upside down and backwards because he refuses to lay still. I tried strapping him onto the changing pad but that didn't work either. So I'm stuck with wrestling a baby until he's potty trained. So I think I'm going to try potty training him next summer so I'm not putting a death grip on a kid so he doesn't get shit all over the house. Because cleaning shit is the WORST.

And that's all for now.

PS - the Monkey is going to Kindergarten in the Fall and I AM SO EXCITED. I think I might be the only parent to be SO EXCITED though. She gets bored at home and keeps asking to watch My Little Ponies so IT'S TIME FOR SOMEONE ELSE TO ENTERTAIN HER.