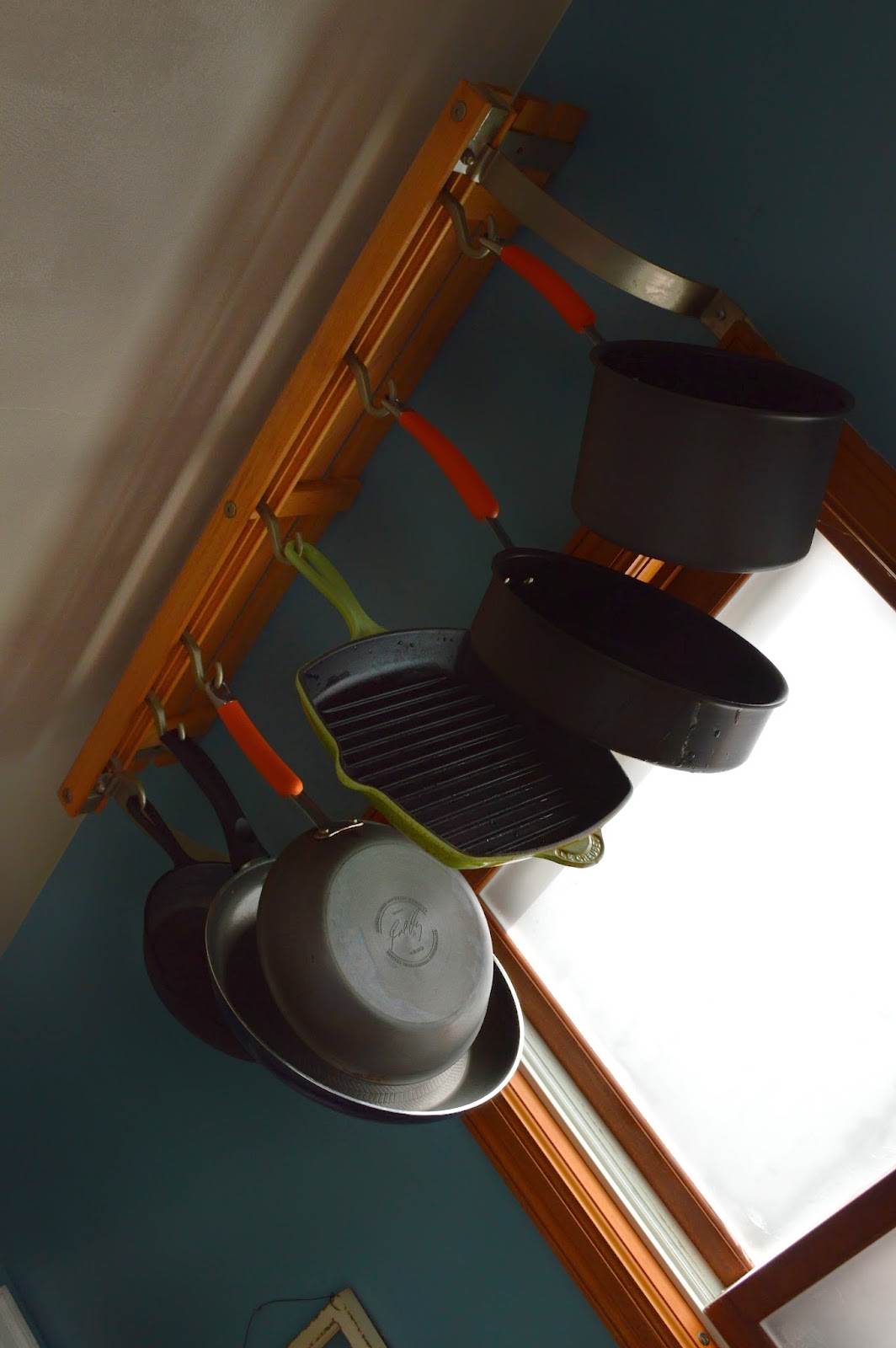 Well, in my attempt to declutter I found a small treasure. Back when Bimmer Man and I got married we received an awesome gift certificate to Williams-Sonoma. I bought a Le Creuset grill pan. Little did I know that the color I bought would be discontinued. I have been searching for these green Le Creuset pans for years... and they no longer stock the Chartreuse which is really too bad so I need to find a new color to covet.

And I stopped using the grill pan because I wanted something a little bit different - one with a flat side to make pancakes and something that covered two burners.

Into the back of the cabinet it went.

Now, in attempt to use it I'm putting it into my regular assortment of pots and pans.

It's also the start of Lent tomorrow which means that we'll be eating a lot more fish and seafood and a lot more vegetarian meals (I know, God doesn't really care if we actually eat meat or not, it's really about the sacrifices and good things you do, but I digress).

So in 41 days we shall see if I have actually used this and how much I really use it.

I may just keep it hanging because it looks pretty.

I think I've reached the point where it's now getting to the hard stuff to de-clutter.

I'm not sure, I guess we sort of have to live a bit with the less stuff and see how things go. I think I still have too many kitchen appliances and kitchen gadgets so I'm going to need to go through my drawers AGAIN. I can think of two baking dishes that I don't use off the top of my head so those are going to go into my "Donate" box.

I tossed two more pairs of pants into the Donate box and I think I have at least two more sweaters that can go.

I'm going to have to clear out some more books. And more children's books. I want at least one empty shelf in the living room book case. Somehow, having one empty shelf makes me feel better.

I donated extra towels, which I haven't felt that pinch yet - I don't think we will anyway. We still have at least 10 towels for 3 of us, so I do laundry every other day, we should always have at least two clean towels around here.

The basement is slowly but surely getting finished. I need to go through two more boxes in our storage area, hopefully toss a few things and donate a few things to have more room. I'm thinking about getting one more storage shelf - but not until next fall when we have to bring the outdoor toys and stuff inside again. There's one storage box that is empty and HUGE that needs to go. It's been empty for YEARS except for random crap we've tossed in.

OH. AND I HAVE A BED FRAME THAT NEEDS TO GO.

We put it outside for the last garage we had but it had no takers. So, I'm thinking it's going to be donated to Goodwill, it's a 4 post bed that's in GREAT shape but it just doesn't fit our style anymore. I'd rather have just a frame until we're ready for something new (or not) instead. It filled up our bedroom and made it seem so much smaller. Time for that to go!

Bah. Back to de-cluttering.

I'm pretty sure I need to return my snowshoes if I want it to snow.

When I bought them back in November I was so certain that it would snow. A lot.

We've had a handful of snow storms that have been accumulations of only 3-4 inches and then it's melted.

BUT I WANT SNOW.

I've been super jealous of the Boston snow storms lately and it's because all I want to do is get outside in the snow.

One of my goals that I want to achieve this year is to bring Simone out snowshoeing in deep snow. I know that she can snowshoe because after a 4 inch snow we went down to the park where she RAN in her snowshoes up and down the big hill, went around the pond and in and out of snowbanks. She was really great at walking in her snow shoes but I think they also slowed her down a little (which was great for me, it meant that I didn't have to run in my snowshoes!).

Sometimes I think Mother Nature is against me.

But probably not next year. Maybe next year we'll end up with 6 feet of snow and Simone and I will have to snowshoe up to the co-op with a makeshift sled to get supplies. HA.

I'm fairly certain that if Bimmer Man could only eat one soup for the rest of his life he would have a VERY hard time deciding between Zuppa Toscana and Byerly's Minnesota Wild Rice with Chicken soup. I would take Zuppa Toscana.

Simple, delicious, easy to make, and well, I'd consider it fairly healthy. But I'm also NOT a nutritionist and I'm sure a nutritionist would say LEAVE OUT THE CREAM. LEAVE OUT THE CREAM. No, oh, no, I would NEVER leave out the cream. That's what makes it so delicious. Even the Monkey eats this - though she's also been on a soup kick lately, so I've been trying to make as many soups as I can to decipher exactly what my toddler will eat (which is a feat in itself...). 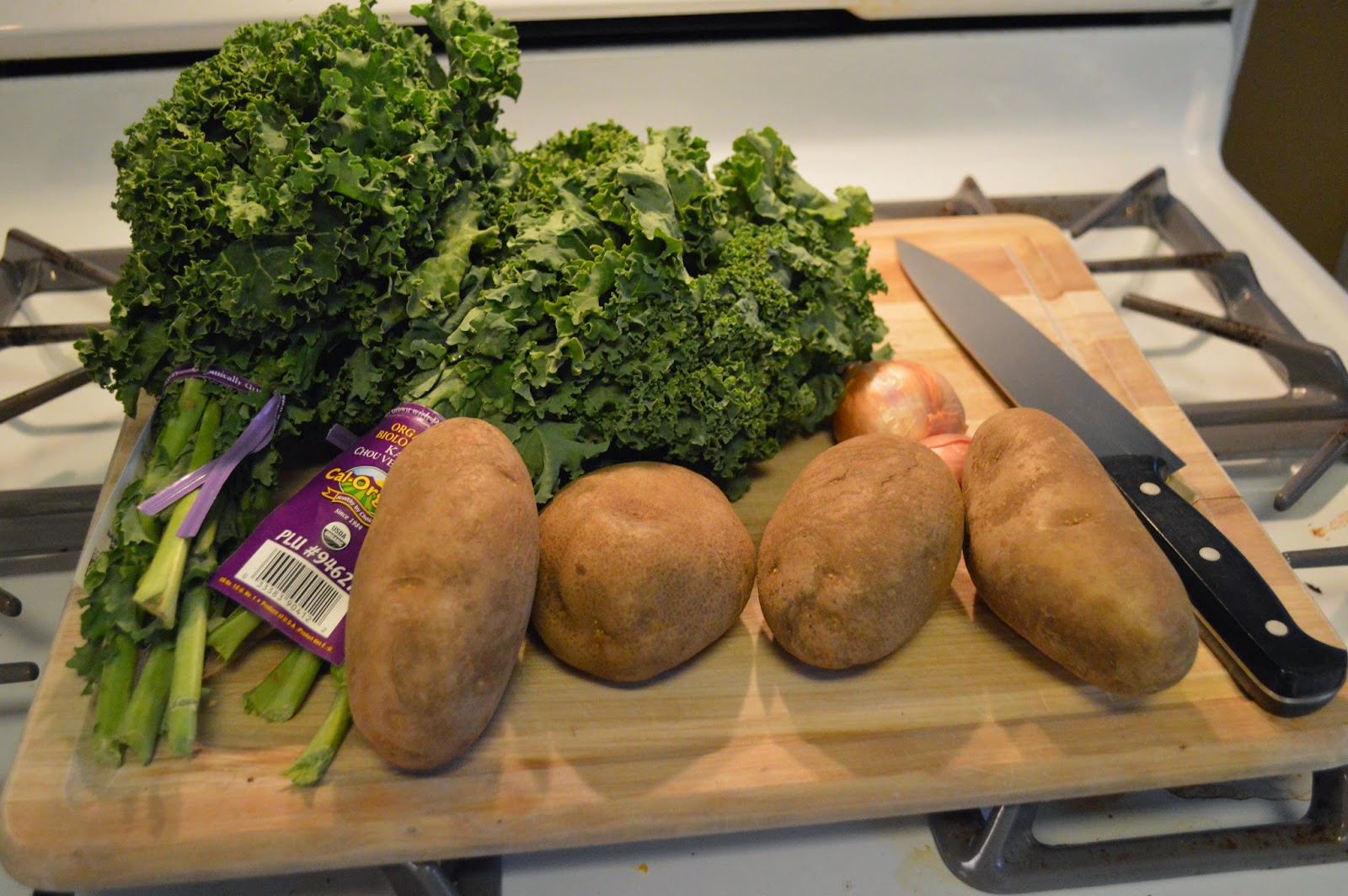 Gather your delicious supplies - basically kale, potatoes, shallots, chicken stock and not pictured is the sausage - I used a bulk sausage instead of sausage in casings. If it's in casings, you can either just slice it to brown it or take it out of the casings. No big deal. Olive Garden doesn't peel their potatoes, I like my potatoes peeled, pick whatever you want. 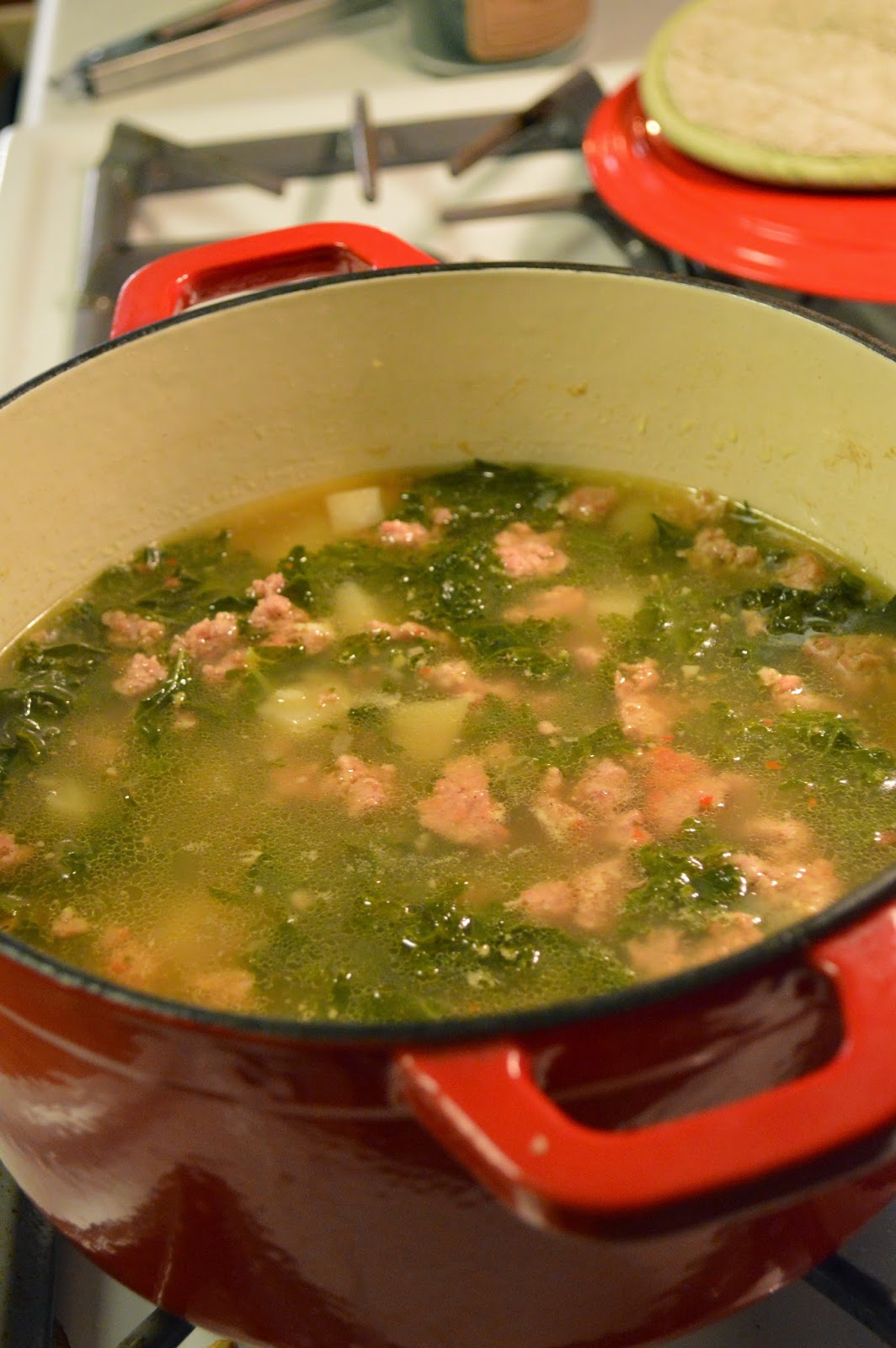 Brown the sausage first with the shallots and some garlic. Then add in the chicken stock, potatoes, kale, some salt and pepper. Let it simmer for 25 - 35 minutes or until potatoes are nice and soft.

I wanted to make this so I could freeze it. I put cream in each bowl to serve instead of in the soup. Cream soups that I've frozen have NEVER turned out as well after re-heating. It's like the cream curdles or it just doesn't taste quite right.

1 lb sausage - I like mild Italian sausage for this
4 Russet potatoes cut into bite size pieces
1 - 2 shallots, chopped (if you like onions, use 2)
1 - 2 bunches of kale, chopped into bite size pieces (I used 1 1/2 bunches of kale because I like kale)
2 cartons of chicken stock (I used 2 cartons of Kirkland brand from Costco)
3 garlic cloves, chopped
Salt and pepper to taste
Cream - just enough to serve, so 1 - 2 tbsp per person

Brown the sausage and drain it.

Saute the shallots with the garlic until translucent. Add back the sausage. Add in the potatoes, half the stock, then add in more stock if you want it "soupier." Simmer for 10 - 15 minutes. Add in the kale and simmer another 15 - 20 minutes.

I froze the rest of the soup in family size portions - then I just buy fresh cream when I serve this for dinner or lunch.