Kim Werker is fun to follow. Plus if you read Crochet Me!, you might recognize her! (And I love to pin all things crochet...).

And I think at some point I'm going to have to re-organize my Boards. I've got so much stuff on my "For The Home" board that I think I'm going to need to put it into different categories - In The House, The Garden, etc... And I started a Holidays board but man... I may have to do different holiday boards, but Christmas stuff I love the best so maybe not...

FIRST WORLD PROBLEMS, I'm telling you - those Pinterest boards! They get you every time!

So let's run down the list of fun people to follow (because I can't leave you with just one!):

And there's more... but I'm the one that clicks to see who people follow and then I just keep clicking and realize that crap... I'm following over 100 people.

Yikes. WE'RE GOING TO BE PARENTS.

So the spare room needs to be re-done, re-painted, re-decorated. Pretty much everything needs to be pulled out and then new stuff needs to be put back in. Which is fine. But getting there... Oy vay. That's the hard part.

So onto the decor. We want at least one more child after this so everything will be neutral. This poor kid is getting the shaft... no "gender" specific items... Plus that also means we can give hand-me-downs to friends when they have children and we don't need to worry about giving them PINK when it's a boy (but boys in pink ties are super cute!).

This is my top rug pick (the multi-color one on top) from West Elm. It's an 8x8 square for $399. Right now West Elm is having a 15% off sale making the rug $339. But I've seen 20% off sales on rugs before... so now the waiting period begins to get a better deal (it better happen before March). I can order the rug in the store and then have it shipped to the store so I don't have to pay shipping. YES. SIGN ME UP. Plus this rug is the only one Bimmer and I can agree on.

Wall Color - see the light gray-blue in the rug? That's going to be the wall color. Not too baby-ish, not too grown up, not too girly, not too boy-ish. We're stayin' pretty neutral here... (though in about 5 years if the room is painted HOT PINK, I suppose that's fine too). SO stay tuned on that. I have to go to Hirschfield's and pick out a Benjamin Moore color - I've had AWESOME luck color matching at Home Depot so I don't have to pay $50 for a gallon of paint.

Crib is from Becker Furniture World - I ordered it in "Cinnamon" so it's a lighter brown. More traditional. This is also a convertible crib so at some point I'm going to have to call and order the rail and crap to convert it. 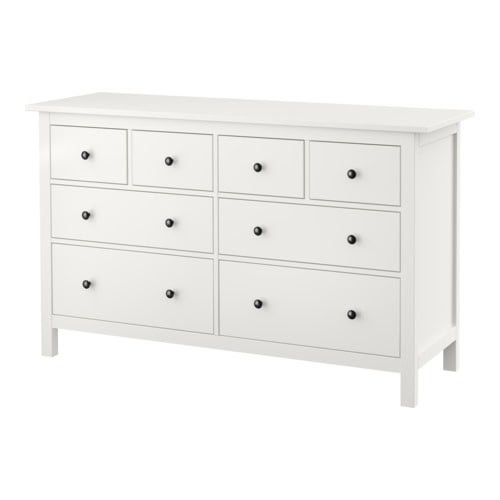 Dresser is from Ikea - the Hemnes, it's $299. I LOVE my 8 drawer Hemnes dresser and there's so much storage that I think this will be a great dresser made to "grow" with. The closet in the spare room is sort of a joke (seriously, it's laughable) that I think this is a great option.

We'll probably end up picking up a changing table and maybe a small bookcase from Ikea too - all in white.

See? Neutral. If I never said we were having a girl, you'd think we would have no idea of the sex, right?

Now the next issue will be decor - prints, do we go with Dr. Seuss? Animals? Owls? Ok, maybe not owls...

In no order whatsoever:

Enchiladas of some sort - maybe beef. Yep, beef. No chicken. But definitely cheesy Mexican. I will have to peruse Pinterest to find myself something delish.

Tacos, maybe. Or maybe spaghetti. But definitely with beef. No turkey.

Ok, I've got a confession to make.

I LOVE getting catalogs in the mail. I'm addicted to them. And magazines. Holy heck, do I LOVE magazines!

And it will be a very sad day for me once I start cleaning out the spare bedroom.

I'm going to have to give away some magazines. Bimmer Man - I know you read this - please note: I typed "some" magazines, not all, not the majority of them, just "some," so don't get your hopes up too high.

So I went on a catalog spree and signed up for as many as I could possibly think of. Since catalogs go out of date and are recyclable, I really don't feel bad signing up for junk mail. Plus I think I can probably keep the US Postal Service in business on my magazines and junk mail alone.

I signed up for:

OMG. I'm turning into my mother.

Well, actually she used to get BAGS of catalogs from a man at work. And those catalogs were AWESOME. They were so much fun to read and look at. And the Sundance Catalog... that's where I got the idea of me needing cowboy boots. And now I have a pair of boots, but they're not really cowboy boots, so I still NEED a pair of cowboy boots! 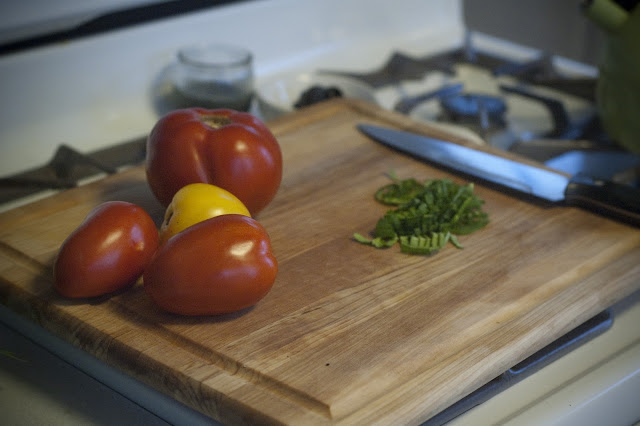 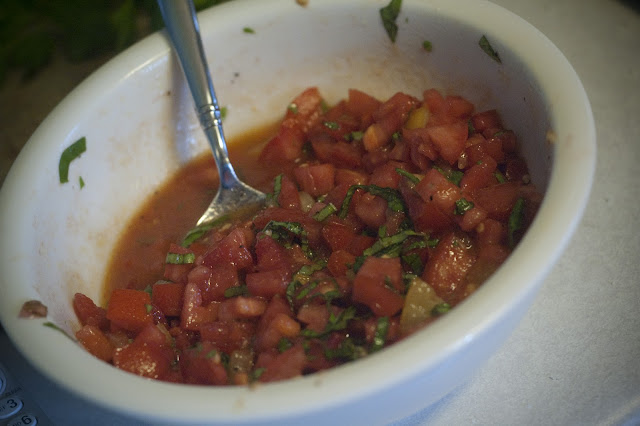 YUM. (Although I had a serious aversion to basil early on, I've sort of gotten over it... I'm seriously waiting for next year to chow down on all the basil possible...). If you use MEATY tomatoes, you'll get more bruschetta, plus it won't be so mushy and you'll be able to fit more of it onto your toasty bread.

These tomatoes came from our awesome CSA - Driftless Organics (which, BTW Driftless, I've still got your check sitting here to be mailed for the December box, so don't fret, I just need a stamp!!!). I think next year I'm going to order a full share - I plan on making my own baby food... we will see how that goes. Rusty is still eating raw so I think this kid has got a good change of eating organic... (and it's a girl - just found out yesterday, now let's see how many of you are paying attention!).

4 - 6 meaty tomatoes - I like using Roma tomatoes, but I'll use anything after using the CSA tomatoes
1 tsp garlic powder
Salt & pepper
A really good handful of basil, julienned
Olive oil - I'd say 2 - 3 tbsp (circle the bottle around the bowl 2 - 3 times and there you have it!)
Good crusty bread, you can toast it in the oven OR on the grill.

Chop the tomatoes into small pieces. Put everything into a bowl and refrigerate for 30 minutes to an hour.
Serve with crusty bread and big paper towels to catch falling tomatoes.

Just when you think summer is over... BAM. I bring out the homemade salsa. It's delicious, to be quite honest. Almost all of the ingredients came from my garden (except for the canned tomatoes, but you can use whole peeled tomatoes - just drop the tomatoes in a boiling pot of water until you can peel the skin off).

I made a ginormous batch of this salsa - I put a ton in the freezer for over this winter, so never fear, you can ALWAYS freeze and eat.

And of course, just a reminder, since I'm fairly forgetful myself, to wear gloves when you're working with the jalepenos (or wash your hands a lot and don't touch your face). 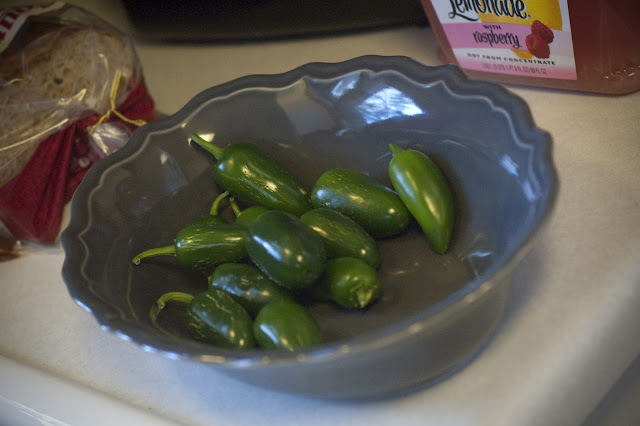 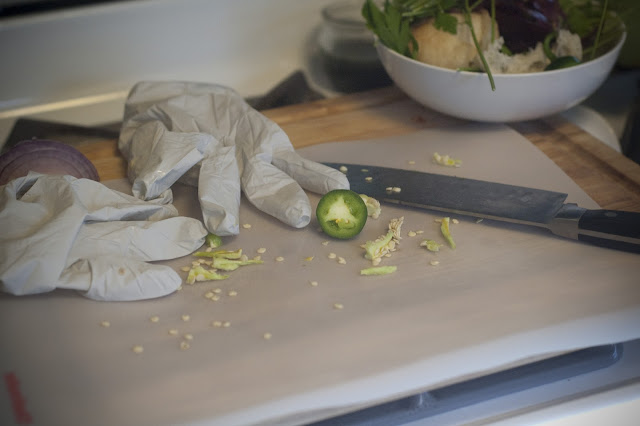 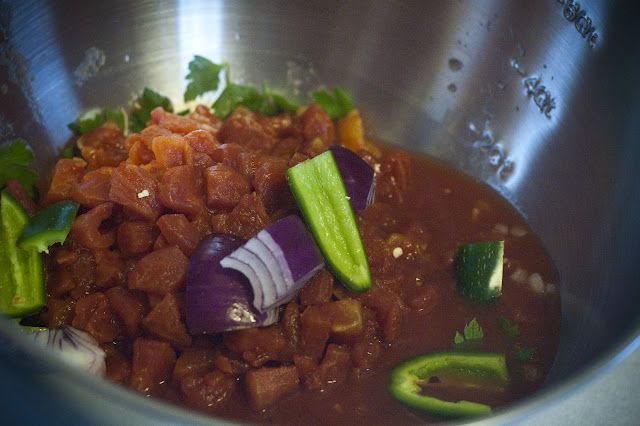 So, here's the recipe:

2 cans of diced tomatoes, or really any kind of tomatoes
2 jalepenos, seeded (unless you like heat, then leave the seeds in)
Cilantro - a good bunch
1/2 red onion to start, but have the other half handy to add just in case
Salt, pepper
Maybe a dash of tobasco if you think you're worthy

I wasn't sure how this was going to go... so I put everything into a big bowl (see picture above) and then I just dumped everything into a HUGE food processor and processed away. This is serious restaurant style, non-chunky salsa and it's delicious.

I made little changes here and there - I added in another few hunks of onion, more salt, and a few dashes of tobasco per Bimmer Man's instructions. 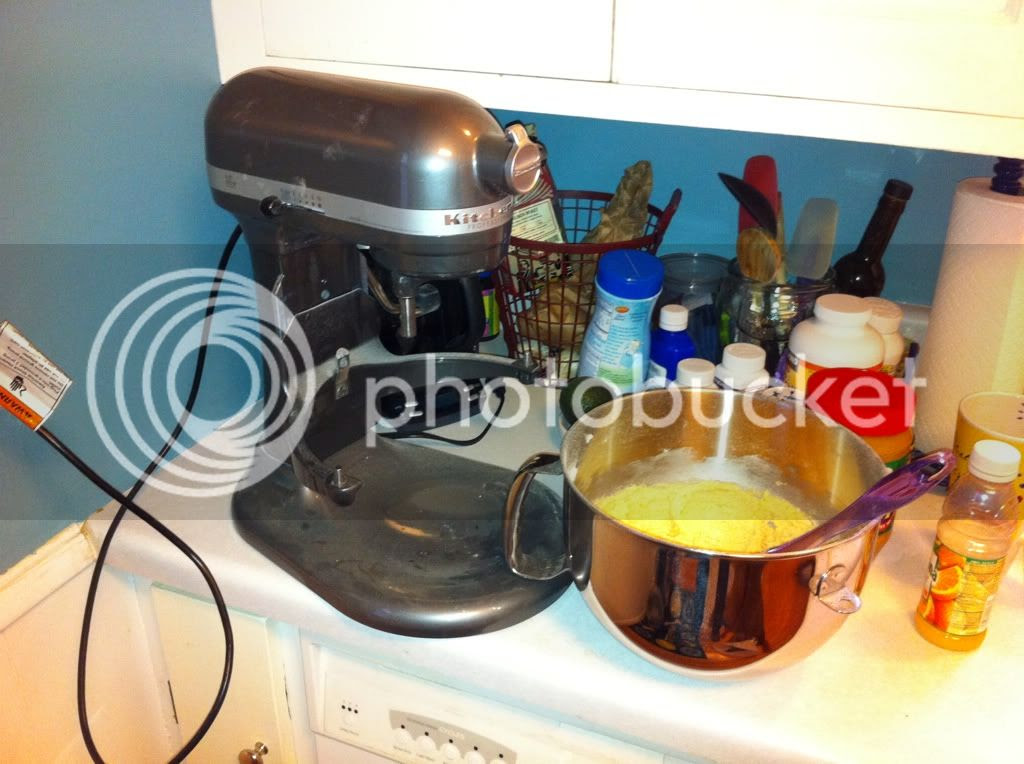 Yes, my dear readers. The Beast has made its presence known in the kitchen once again. 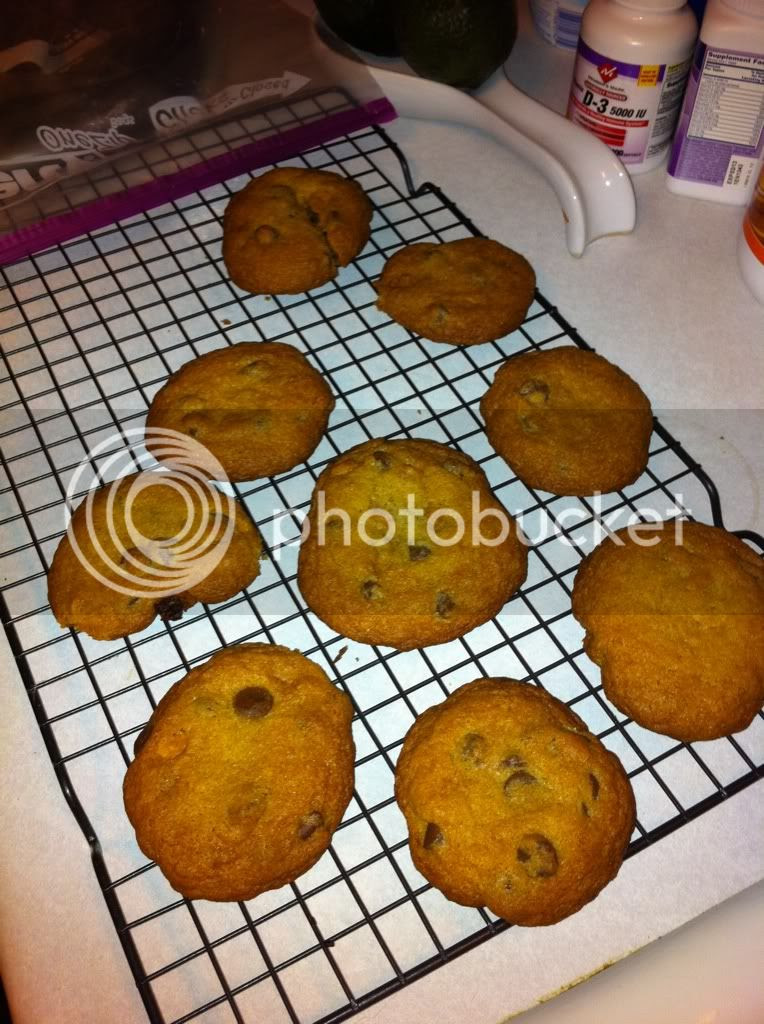 Somehow an iPhone seems easier to take pictures on lately. Mostly because I'm fairly certain I've the charger (AGAIN) to my poor Nikon battery. Oh, well. Add that to the list of things to find!

My only issue with this recipe: Soft cookies = 9 minutes of bake time while if you bake longer than 11 minutes you'll feel like you'll break your teeth the next day when you try to eat one.

Glitter Runs Through My Veins At Christmastime

This book was pretty good - Faithful Place by Tana French. I really enjoy mystery novels and I like how the author writes - not only does she leave some things lingering, but the story doesn't come together until the very end. Her writing is suspenseful and each of the characters in the book has a place. Don't you hate it when you read a book and you think, why the heck is this character even here?

The setting takes place in Ireland - present day and also goes back in time. Frank Mackey leaves his family because they're a bit odd (well, you know, there's the usual crazy siblings, drunk father and typical Irish mother) and he planned on eloping with his secret girlfriend. She didn't show up that night. He left anyway. The family thinks the girlfriend is with him. He thinks otherwise. Blah. Blah. Blah.

Then her suitcase is found and all hell breaks loose. He goes back to his family, finds out the truth, gets in fights with his siblings, re-examines relationships, etc... And yes, the real murderer is found - and like the other Tana French novels, there's a twist. If you don't read ahead like me, you start to suspect but don't actually know until the truth is out there in the book.