10 Random Facts About Me Today

1. When Bimmer Man and I retire, I sure hope we can retire to North Carolina or Georgia.

2. Since I installed a calorie tracker app on my iPhone I've lost 2 pounds.

5. And I only jogged a mere 2 miles on Saturday. Not too great.

7. I only make spaghetti sauce, I never buy it. 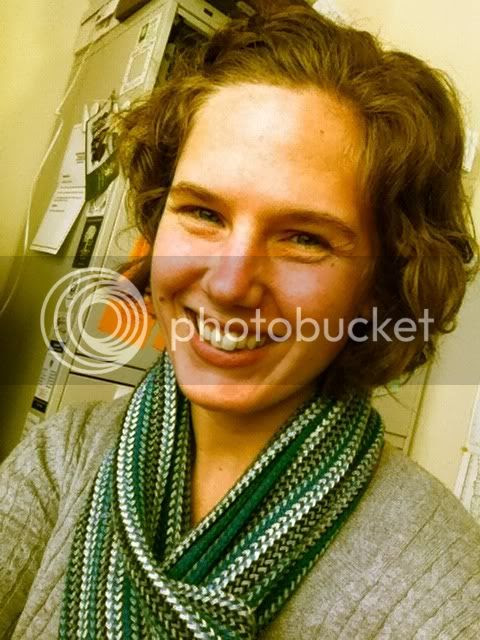 is by Mary Janice Davidson. It takes place in Minneapolis (of all the places for vampires and crap... it had to be Minneapolis... and trust me... not all the geography is correct though the stereotypes of Edina are) and is short, sort of stupid but easy to read. If you're going on vacation or to the beach it'd be great to bring along. The next two are on my list to read when they pop up as available on paperbackswap.com: Undead and Unemployed (Queen Betsy, Book 2)

I'm only about halfway through. It's very rough, straight to the point and sometimes disgusting. I like it. I like it a lot. Well, I really like the show "No Reservations"

so I knew that I'd probably enjoy this. He takes you through his career, lets you in on restaurant secrets and makes you laugh. Yes, he was formally trained, but he also takes you through the early stages of his career and how he chose to become a chef and food lover... And of course, there's always the drugs, booze and sex going on in kitchens... So it's fairly good, I can't wait to have time to finish it!
Posted by Patty at 1/29/2011 10:13:00 AM No comments: 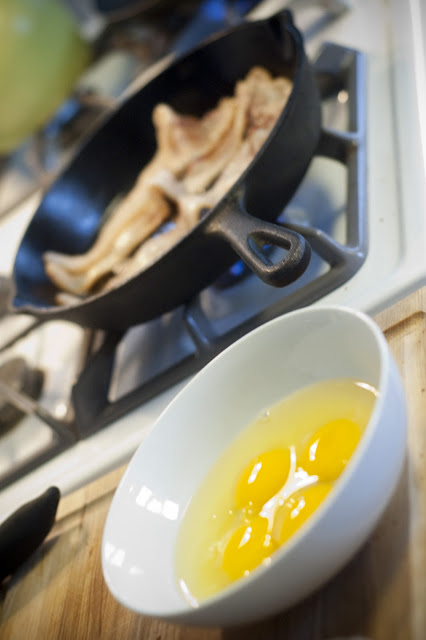 Dining Room Storage - I NEED It

We have a clutter problem. Since I use the dining room table as a drop spot for mail, it ends up completely cluttered and overwhelmed by the end of the week. And then stays that way until we have company. I've resolved to get some sort of buffet, sideboard, bench thingy, hooks, I don't care what.... to hold excess dishes and clutter from the kitchen, wine, maybe the booze... I don't know...

I just know that I can't stand the cluttered dining room table anymore and I need more storage.

Isn't that a lot of people's problems? Needing storage? We need storage in lots of areas of this house but I'm definitely starting with the dining room first!

Sonoma Console, $269 I like how open this is, but I think I want to cover up some of our crap. I think I'd make it look way too cluttered even though open storage supposedly "opens up" spaces. Not in mine. 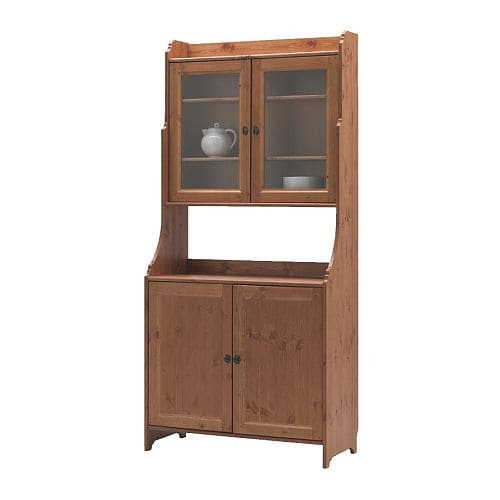 Leksvik, $279 I was at Ikea this past weekend and saw this in black/brown. It might look nice, but I'm undecided on the height, I was hoping for something shorter so that I don't have to move a piece of artwork AND I could put vases of flowers on it throughout the seasons. Well, fake flowers in the winter. 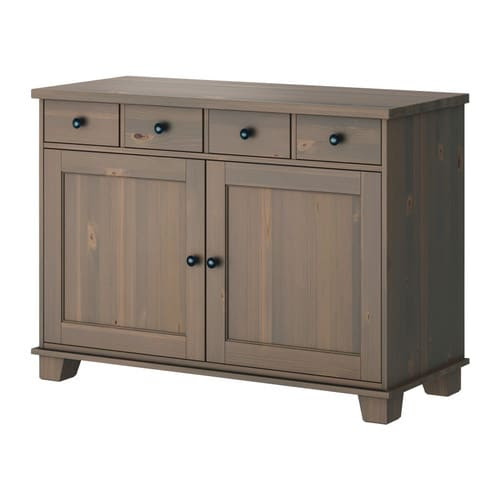 Stornas, $449  There's also this one, but I don't like the color. I'm going for warm tones, black or antique white.

I think I'm at the point where I just can't "buy something" anymore because I want it to be nice. Does that make sense? Before I'd go to Ikea, pick out the cheapest and say, that's it! Now, I would like nice furniture and I want to love it forever... I need to go antiquing this summer and search for deals (guest bedroom furniture, sideboard, chairs, sofa, etc... Maybe I can convince Bimmer Man to buy a trailer...).
Posted by Patty at 1/27/2011 07:41:00 AM No comments:

Apparently Mood Boards Are All The Rage

So I made one with a French Country inspiration. Can you tell I'm wanting to leave the awful cold and snow of Minnesota? I'm doing a beach one this afternoon.
Posted by Patty at 1/24/2011 11:13:00 AM No comments:

Rugs. It's Too Cold For Plain Wood Floors. 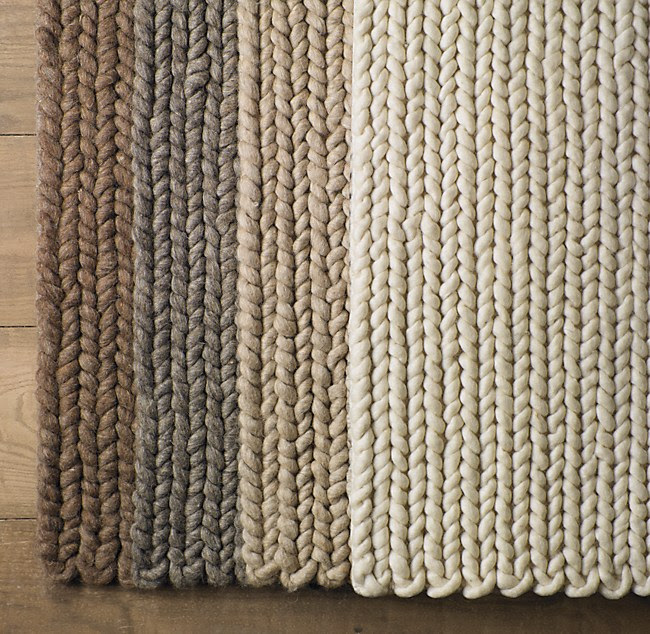 Don't these look so soft and cozy? Especially with this crazy cold weather... I've been lusting after rugs like these for our living room!

What Happens When You Don't Pay Attention?

Joys of Being a Homeowner - Ice Dams

Being a homeowner in Minnesota in the winter can sometimes be a pain in the ass. Especially when the previous owners of our house treated it like a rental. They did nothing. Absolutely nothing besides probably hiring painters to do the whole house in a light baby shit brown color. Go figure.

By the way - the previous owners had Ph.D.s' and one is now a professor at Harvard. So no, no street smarts (before you get your panties in a bunch, I'm not saying that all professors do not have street smarts, just the people that owned our house).

Yesterday, I wished that I lived in a condo. And had lots of wine. And beer.

Last night after getting home from baking pies with my fabulous friends (Kathy: you are awesome for hosting and don't worry, baking is trial and error sometimes but you will make delicious pies! Buck: you are going to make fabulous bread and pies, don't worry about being a hippy, I've got a composter!), I found this: 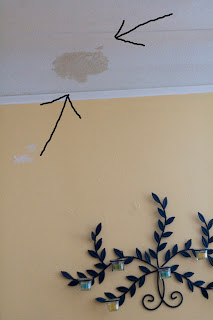 This is a very wet plaster cove ceiling. VERY WET.NOT GOOD. LIKE I NEED TO TAKE A SHOT OF VODKA RIGHT NOW NOT GOOD. 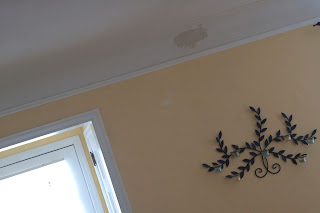 You can see that it's near the front door. I just about had a heart attack. I panicked, then put my glasses on and went outside. Bimmer Man grabbed the roof rake (more about that later). 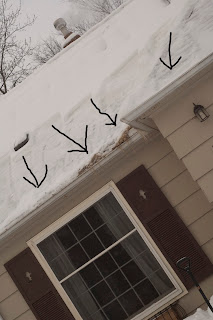 The arrows show where to look for the ice dams. You can see the large chunks of ice in the gutters and partially on the roof. This is NOT GOOD. 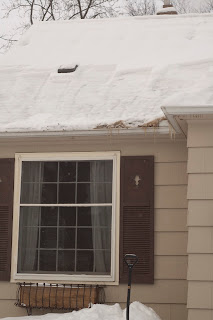 Here's another shot of the ice dams with no arrows. Now, one of the reasons why we have ice dams HERE in this spot is because there is NO INSULATION in the attic space above the living room. So that area is much warmer than the outside, which means that the heat in that area is melting the snow on the roof (but not all the way, so it re-freezes, causing ice dams).
Another reason why we have ice dams besides NO INSULATION: I could not get the gutters cleaned out before the first snow. There's leaves, dirt and junk in the gutters causing the water to back up. This spring I will be getting some sort of gutter guards so I don't have to worry about cleaning them as much. 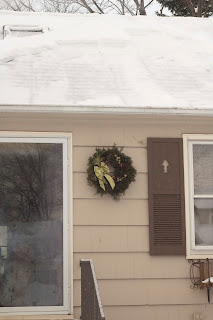 There are no ice dams on this part of the house. Why? Because there's adequate insulation to keep the attic at the same temperature as the outside, so no ice dams. No temperature changes, no worries. What also helps is a roof rake, and getting the snow off the roof so that there's not an influx of melting snow to re-freeze at night. And Roof Melt

, which I pretty much saw the ice dams and bolted out to the garage to run to Jerry's Hardware store for yesterday. So here's our plan:

1. Buy insulation for the attic above the living room
2. Continue to rake the roof
3. Continue to improve my throwing arm with Roof Melt pucks
4. Repair the plastic in the living room, once the ice dams have gone away and we know that they are not coming back.
5. If they do come back, then we're going to hire people to come and melt them away. 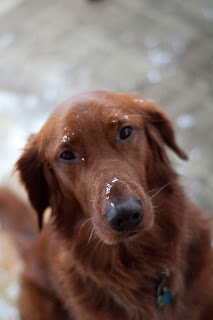 Last night I was perusing Country Living and realized that yes, I did miss this magazine because:

1. My mom reads it and it makes me think of her;

3. White is really awesome for decorating.

Check out this AWESOME fireplace and the really chic sofas. I love how the leather chair is incorporated into the room and it fits perfectly.

And this room is so crisp and clean. It makes me want to sit down with a good book and cup of tea. Or maybe a nice big glass of spiked sweet tea (Oh, Jeremiah Weed, I do love you!). Beach houses are just great for the clean, white look. It's airy and inviting.

And the above pictures make me so happy that I painted all the trim (except for three rooms and some windows) all white.

What Time Is It? 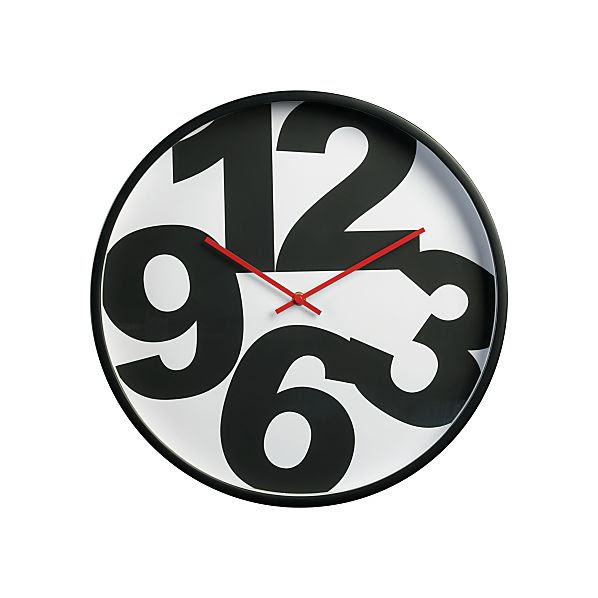 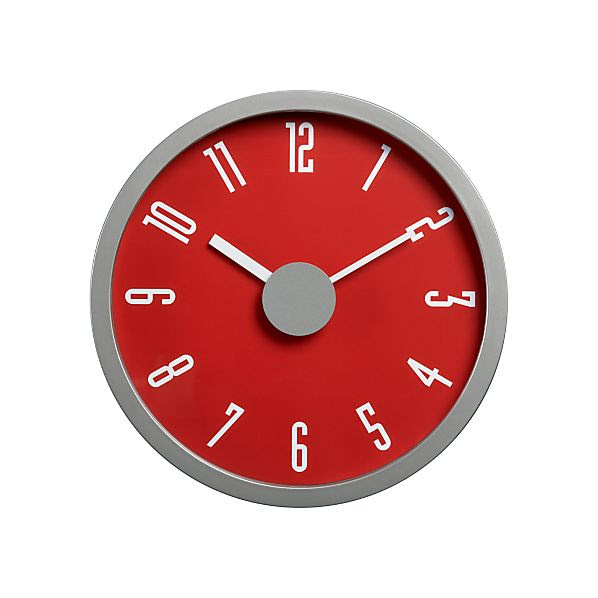 Menu For This Week

I don't ever want to see McDonald's, Burger King or possibly any steakhouse for the next few months.

And I feel like I gained 10 pounds after our adventures in Colorado. And no, I don't ski (well, I haven't for like 10 years), and no, I don't snowboard (I have twice, but I do have my own board, so maybe I'll start again).

So, here's what we'll be eating this week:

But it will be baked or grilled.

All HEALTHY. Well, that's what I'm shooting for this week!

But I LOVE French decor even more. Or even anything with a hint of Paris or French words or French country or anything that's glass and sterling silver. I wish my house was french country, however, it's not. It's post WWII era boxy cape cod. Well, I guess I like the beach so I decorated it sort of beachy. Kind of. Maybe the south of France can inspire me more this year? 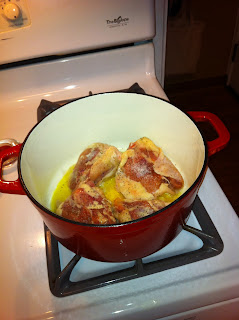 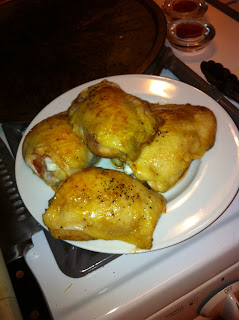 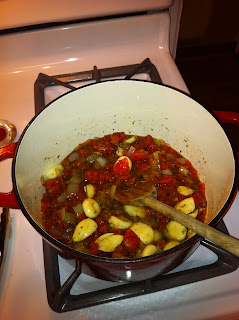 Thanks to my iPhone, I now have a camera at my hands all the time! No running back and forth from the office when I want to grab my camera to take pics! WOO HOO!

So chicken with garlic and tomatoes in my new enameled cast iron dutch oven.

4 pieces of chicken with the skin on
2 tbsp of butter
1 tbsp olive oil
1 can of diced tomatoes
1 head of garlic, cloves smashed into pieces
1 small onion, chopped
2 tbsp of Herbes de Provence
1 cup of white wine, whatever kind you like, it doesn't really matter OR chicken broth
Salt and pepper

Season the chicken with salt and pepper on both sides. Brown the chicken, skin side down in the butter and olive oil, turning after a few minutes. Brown the other side. Pull out the partially cooked chicken.

Add in the onion, cooking until clear. Add in the garlic, cook for about 3 - 5 minutes until fragrant. Add in the diced tomatoes and wine (or chicken broth), scrape up the browned bits from the bottom.

Dump in the herbs, stir everything around.

Add the chicken back into the pot, nesting it into the tomatoes. Dump some of the sauce over each of the pieces of chicken. Add in more wine if necessary - the liquid should be covering 3/4 of the chicken.

Put into the oven for about 1 1/2 hours. Check on it when it has about 35 minutes left, add in more wine or chicken broth if it seems too dry. 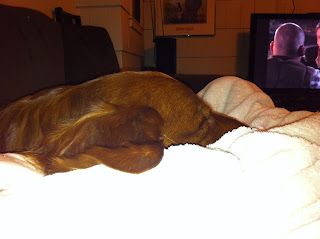 He snuggles a lot. Actually, his favorite thing is to either lay on you, or crowd you out of the couch, meaning that your rear end has about 3 inches to balance upon when watching tv or reading. 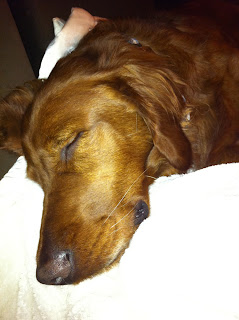 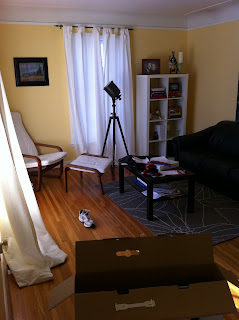 I took down the tree on Friday. We only had three presents underneath... thanks to my family's Christmas Gathering today. So... I decided it was time to take everything down. Now what's left seems so bare! 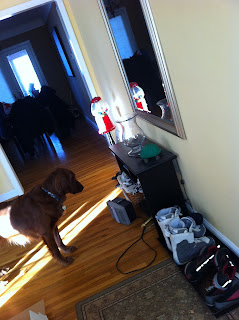 The bulbs are out of the glass vase and now I need some new ideas to fill it. Rusty thinks it should be treats. BUT I do have to say that I LOVE, LOVE, LOVE the boot tray that I got at Bed, Bath & Beyond for $12.99. I was thinking about filling it with river rocks to help dry out the shoes and boots. Meh, we'll see how ambitious I get next week.

I also think that a trip to Ikea is in my future this week. Maybe looking at small buffet tables for the dining room or living room? Meh... we shall see...

4. Clean out the spare bedroom