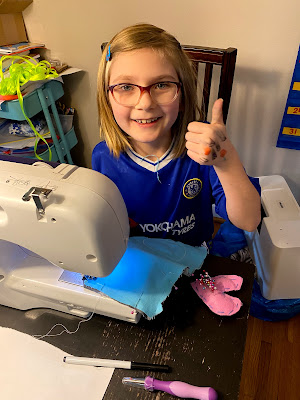 After a terrible December (thanks, Covid), we're finally back to somewhat of a normal schedule but not really...because what exactly is normal these days??? I'm not sure anymore.
But The Monkey has wanted to learn how to sew since this past summer when I was busy making hundreds of masks. So I bought her a hand sewing book to learn the basics and learn how to not poke herself with a needle (she drew blood multiple times but carried on!). And then she still desperately wanted to learn how to machine sew. So I ended up buying her The Sewing School 2: Machine Sewing book for kids - it had a few projects that I was sure The Monkey could tackle with little supervision, but mostly me hovering over the machine making sure she wasn't going to break my machine. 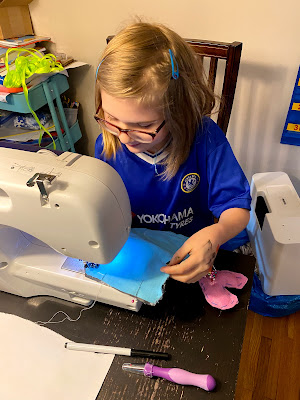 With her first project she learned a very important lesson: read through the instructions VERY carefully. She didn't read them all (I don't read the instructions for her DIY stuff because I think it's important for kids to learn skills by themselves so that they grow up to be competent and skilled adults, independence is a big skill to learn and this also teaches work ethic and to be proud of the things that you do on your own, so parenting moment included in learning how to sew). The Monkey ended up ripping up a whole project because she missed an important step - marking ears on a stuffy, which can't be done after you've sewn the whole thing inside out. She also realized she started/stopped at the wrong side. 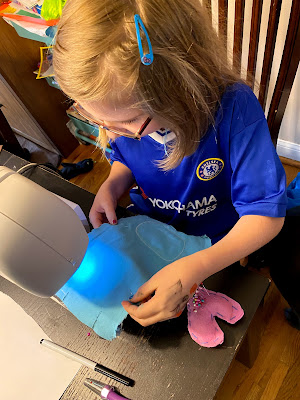 I gave her a few tips and tricks for starting/stopping, which way to pull a finished item so she can cut the threads with the thread cutter on the machine and how to use a chopstick to push out corners in projects.
After she finally got her first project CORRECT, the girl is addicted to using the machine and she absolutely loves it. I'm going to have to come up with a few more Pinterest sewing projects for her to do on her own, with little help from me (other than saying, "BE GENTLE WITH THE PRESSER FOOT!" and also "TURN THE NEEDLE TOWARDS YOU NOT AWAY!"
Onwards we go into a new hobby this year! Hopefully I've inspired her to sew for the rest of her life.
Posted by Patty at 1/14/2021 11:01:00 AM No comments:

Everything is shenagans these days.

Kindergarten next year for Chewy (OMG).

Phil being Phil. He ate 2/3 of a full container of peanut butter yesterday and got a whole M&M cookie today. It's shenangans.

I read 71 books so far this year. I'd love to write book reviews on all of them but frankly, I don't have the time - motivation is definitely there but the time is not. MER. 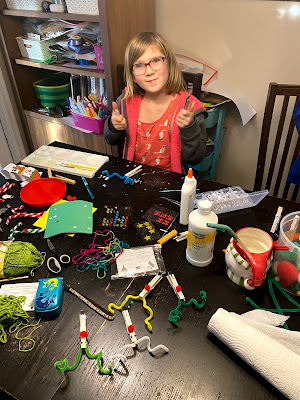 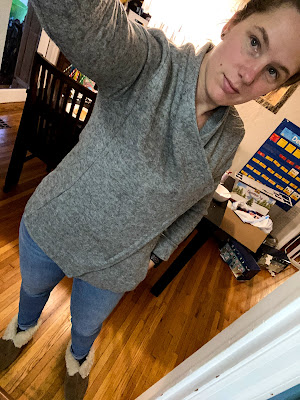 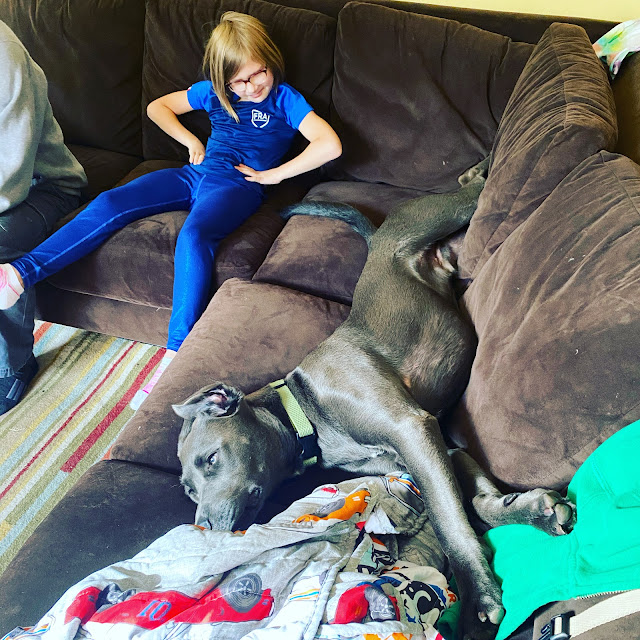 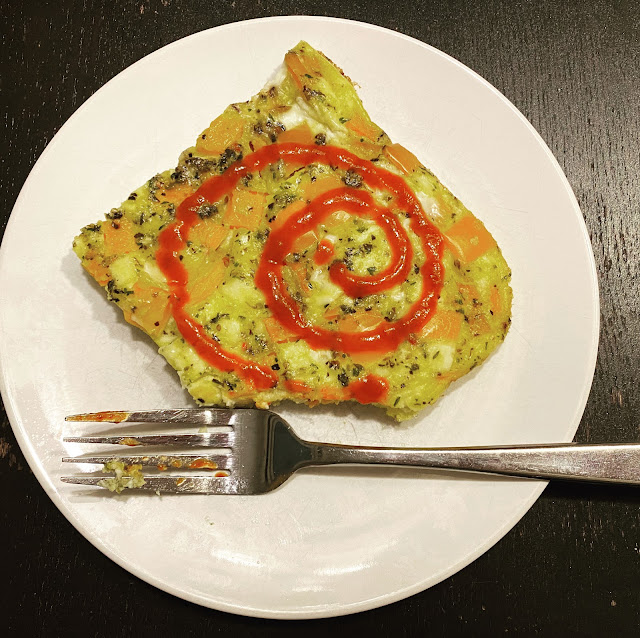 Baked Egg Frattata
12 eggs
1 bell pepper, chopped (any kind is find, I usually have the Costco variety pack on hand)
1 small package feta cheese, crumbled
1 tbsp Italian seasoning
Salt & pepper to taste
Preheat oven to 400 degrees. Prepare a 13x9 baking dish - I use glass and spray with non-stick spray.
Break the eggs into a large dish. Whisk them all together until all yellow and combined. Add in Italian seasoning, salt, pepper. Add in pepper and feta.
Pour into baking dish making sure that all the ingredients are evenly around the dish.
Bake for 15-20 minutes until egg pulls away at the sides and the egg is set in the middle.
Cut into 6 pieces for individual breakfast servings.
I top everything with sriracha.
Variations: add in zucchini or yellow squash, Italian sausage, swap feta for mozzarella. Chorizo, jalepeno, bell peppers, with Mexican cheese
Posted by Patty at 11/02/2020 08:58:00 AM No comments:

Now that it's over... here they are! We had a spooky pumpkin and a Vampire Queen. I enjoyed this year because we didn't have as much candy as normal, so thank goodness it won't be in the house for WEEKS this year! Yay!! Hope your Halloween was awesome. 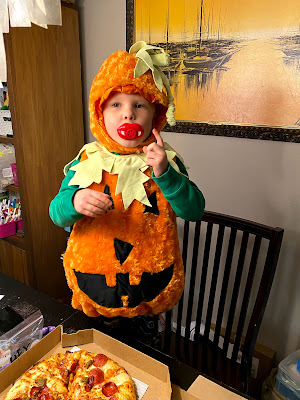 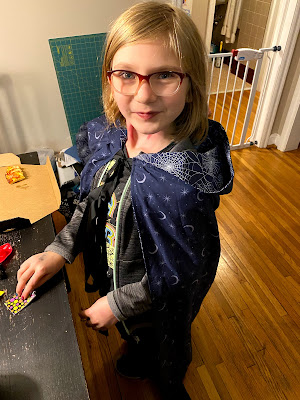 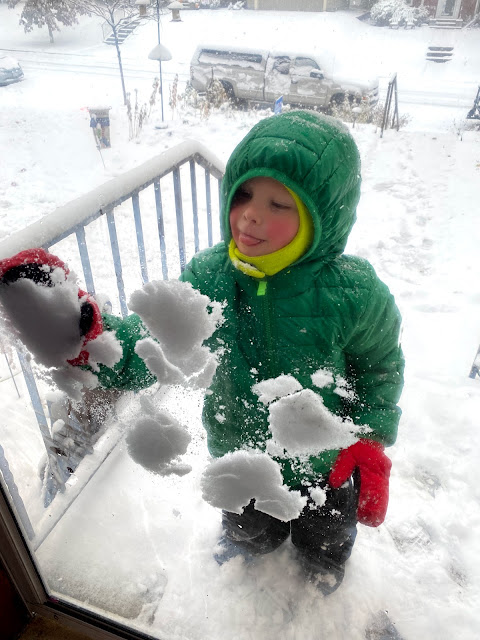 Minnesota has the weirdest weather sometimes. But, luckily for Baby Chewy he no longer needs to come inside for a snack. He's got the snow in the front yard. 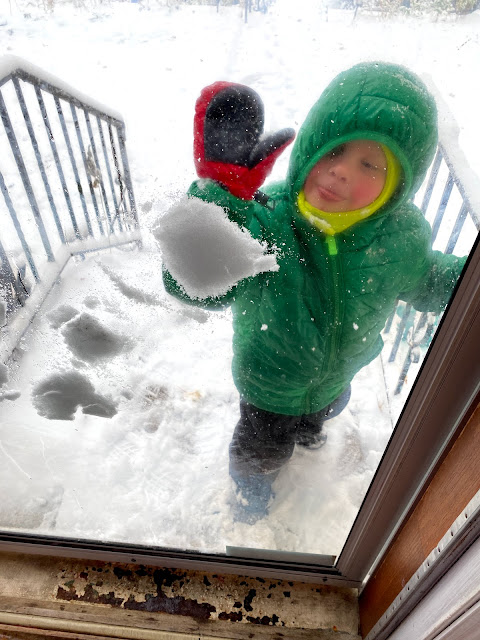 The snow has now melted a bit but it's still cold - I'm hoping for another day in the 50s before it gets terribly cold so I can finish cleaning up the yard. Oy, this snow came before some trees even turned colors! 2020 is really throwing the heavy stuff at us.
Posted by Patty at 10/30/2020 08:52:00 AM No comments: 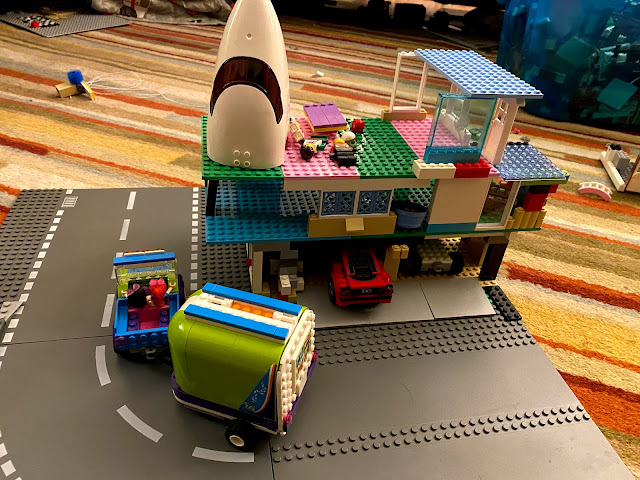 Exercise During a Pandemic in Winter 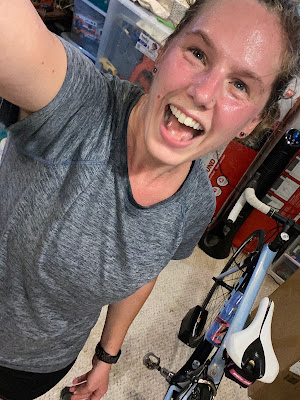 Going into it here - I've gained 10 pounds since last November. It's mostly alcohol weight, along with the fact that I stopped exercising for a long while. Also, we're home and I cook and I LIKE TO COOK so I definitely don't make the healthiest of food all the time - but I don't make things like Hamburger Helper, if we want that, then I make it from scratch. And stress.
I used to be up at 5 to do a workout video. Then I'd make myself a protein shake for breakfast, I'd meal prep my lunches, and calculate the calories with dinner. In short, I was obsessed with controlling what I was eating. And that stopped. And I feel better now. Like, I lost a stress that I didn't need.
But I also gained more stress - yay, pandemic!! I tried so hard to keep up with waking up early but I was so exhausted and just plain burnt out by 5pm. I couldn't wake up early anymore and be "on" the whole day, I needed the sleep so I stopped waking up early. 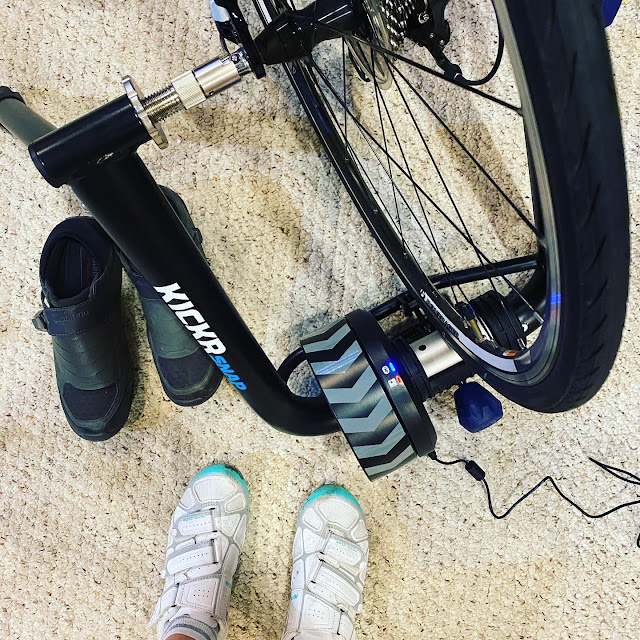 A long time ago we used to have a bike trainer. It was loud, it was awful. I didn't like it. Also, Bimmer Man used to exercise by riding his bike to work and doing classes at the YMCA.
I mentioned getting a trainer last year because our neighbors are cyclists and they use Zwift, and again this Spring but Bimmer Man brushed it off...until he decided that he needed to workout too (can I get an "I TOLD YOU SO" here? Because I think this deserves it). I literally signed up for a Beachbody account because I can't ride my bike AND watch children at the same time so this was the only way that I could workout and exercise. 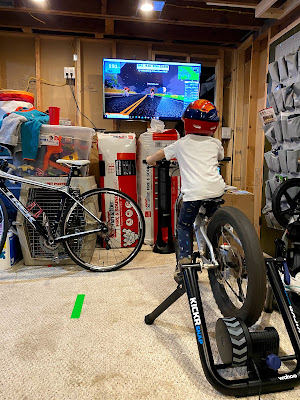 So he created a Zwift account, got a trainer, and now we're back at it. I took yesterday off for a rest day, and today is weightlifting for me, tomorrow I'll be on the trainer for at least an hour in the morning, I think - we'll see how early I can wake up! If not, I'll carve out time in the afternoon for a ride.
It's somewhat satisfying??? It's not the same as being outside but the routes are pretty good - there's lots of hills and hill climbs (Bimmer Man just jumped right in after not biking for awhile and picked a hilly route, so he's still sore). I don't mind riding with the other virtual riders either - it's fun to pick a rider and try to pass them. I think I saw you can race too but I'm not all that competitive, and I need to ride more before I even think about it! There's some really awesome riders on the Zwift.
So that's where we're at right now. I finally have cardio that I can do at home that's not a Beachbody HIIT workout video.
Happy Tuesday!
Posted by Patty at 10/27/2020 08:46:00 AM No comments: 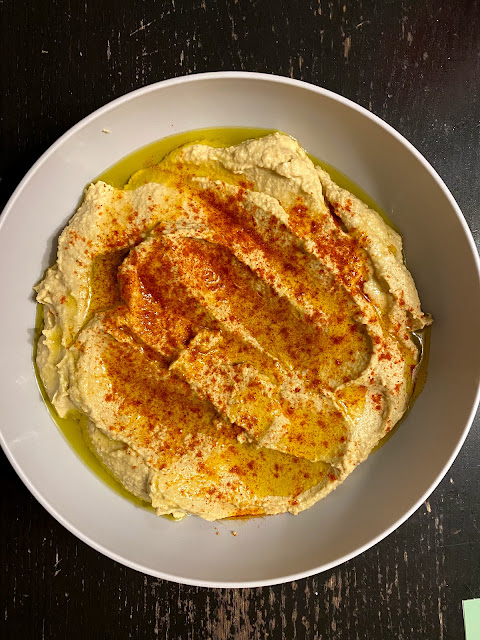 I don't have a fancy recipe roll reader thingy. Deal with it.
Super Easy Hummus
1/3 cup really good tahini
3 tbsp cold water
2 tbsp olive oil
1 tsp cumin
3 tsp minced garlic (well, I use 2 spoonfuls of garlic because I LOVE garlic!)
Heaping 1/2 tsp salt
Juice of 1 lemon (or 2 tbsp of lemon juice)
1 can of chickpeas, drained and rinsed
Toppings: Olive oil & paprika
Add ingredients tahini through lemon juice to a food processor. Process until ingredients are entirely smooth and blended.
Add chickpeas, process until smooth - or keep chunky if you want to, whatever your tastebuds like.
Transfer to a low, wide bowl.
Add a turn or two of olive oil, sprinkle with a couple dashes of paprika. VOILA!
Serve with pita chips, pretzels, cut veggies
Posted by Patty at 10/27/2020 08:10:00 AM No comments: